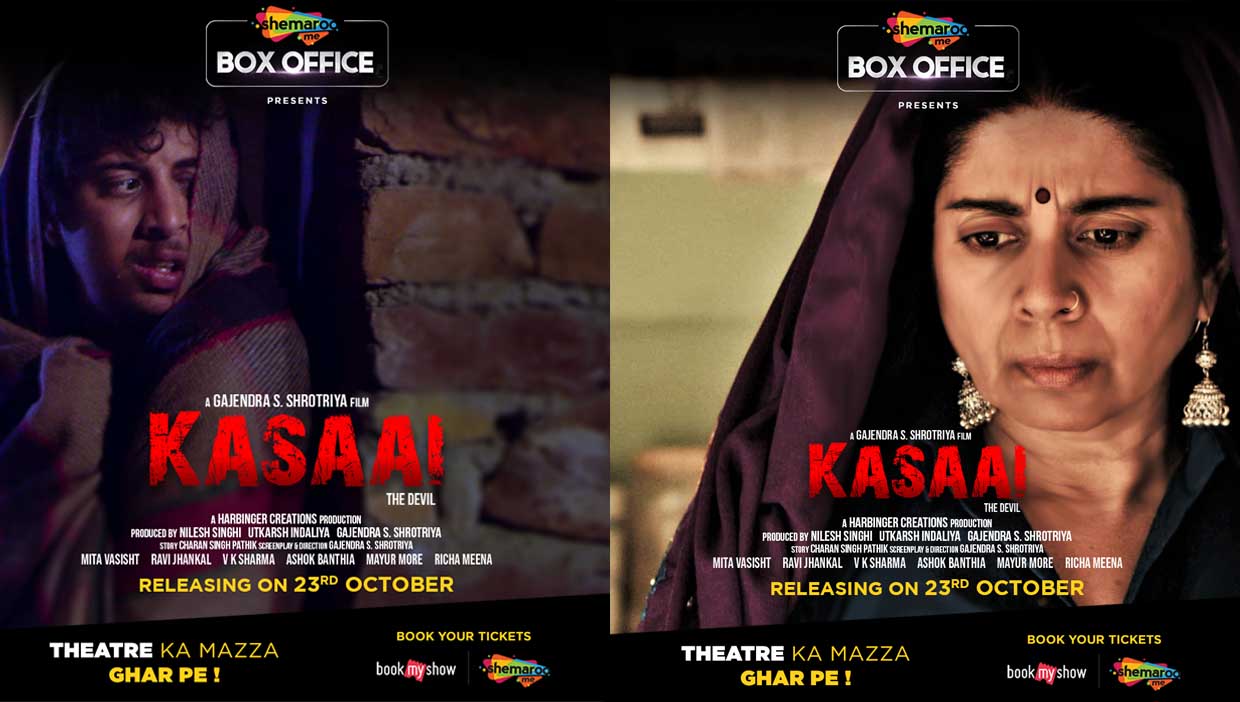 The Mita Vashisht starrer has won multiple awards on various national as well as international platforms.

India, October 16th, 2020: The pandemic may have kept theatres shut for a long while, but ShemarooMe Box Office has made sure the magic of cinema is still alive. By releasing an array of films from different genres, the leading OTT platform has left no stone unturned to bring the finest of content to the audience, right at their doorstep.

Continuing this trend of showcasing movies loved by the masses as well as classes, ShemarooMe Box Office is all set to release Kasaai, an acclaimed socio political drama. The film has received unanimous global recognition, right from being named the best feature at the Open Window International Film Festival 2020 to getting a special mention at the 11th Jaipur International Film Festival. The Gajendra S. Shrotriya directorial has been a critical darling wherever it travelled.

Penned by Pataakha writer Charan Singh Pathik, Kasaai is based on real incidents that still occur in rural India. A gruesome murder takes place during the all important village elections, but dirty politics leads to the cover up of the startling crime. When a mother refuses to bow down to pressure and relentlessly fights for justice, the whole façade begins to tumble. The hypocrisy of honour and importance of morals are explored in this film.

“Some roles not only satisfy us as artists, but also make us proud of the message they impart. The entire team worked very hard and the accolades being showered upon us are truly special”, shares Mita Vashisht. The Ghulam star, known for her power packed performances, plays Gulabi, the bereaved mother who starts the battle. Having snagged three best actress awards for her stunning portrayal of a tortured soul, she goes on to add, “Kasaai is a cautionary tale as much as it is a moving drama, it serves as a mirror to society, and I am extremely excited to see how audiences react to it on ShemarooMe Box Office”.

Mayur More, recently seen in Kota Factory, plays her son in the movie. He says, “As a young actor starting out in the industry, what more can one ask for than sharing the screen with such great talents and being part of such a well written film. The cherry on top is that Kasaai arrives on ShemarooMe Box Office, the number one destination for all cinemaholics.”

Veteran actor Ravi Jhankal too has a few words of wisdom, “I’ve been in the industry for several years and worked on many esteemed projects, Kasaai is one such film that I shall always cherish.”

Talking about his subject and the boon of digital streaming, director Gajendra S. Shrotriya says, “My film is based in the hinterlands and discusses some grey issues, I am glad that we have been getting so much love from film festivals around the world, but in the end the audience is king and we are finally bringing our movie to them. ShemarooMe Box Office has opened up a new avenue for makers like me, we now have a reputed and promising platform ready to back us even without big names attached”.

With every new release, ShemarooMe Box Office is ensuring that the audiences can enjoy fresh stories and discover unexplored themes. Kasaai seems to be another film that will win over viewers with its strong story and excellent performances.

Tickets are available on the ShemarooMe website and BookMyShow.